Knowing the Difference betweenTHC vs CBD 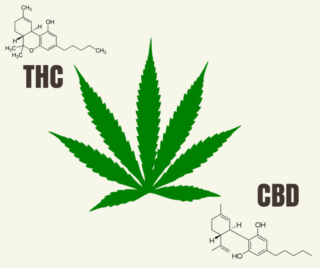 The UK’s cannabidiol (CBD) industry has positively lit up, set to become a £1 billion market by 2025. The growth is largely driven by people becoming more aware of the benefits of the hemp-derived compound, and the de-stigmatisation of cannabis. Talking about marijuana and is just not as taboo today in the West as it was twenty years ago.

As such CBD has also been demystified. But even with a rapidly expanding presence on market shelves and online stores, many don’t understand what CBD truly is. Lawmakers in the UK still struggle to effectively police the proper production and sale of the substance. Many link it to the intoxicating tetrahydrocannabinol (THC) found in marijuana, which is not entirely accurate.

To help clear the air, here’s our guide on some of the similarities and differences between CBD and THC.

Similarities of THC and CBD

In terms of molecular makeup, the two are practically twins, with the exception of a single atom. The difference is therefore microscopic (stacked atop each other a million atoms would only roughly be as thick as a sheet of paper) but this small deviation makes a world of difference. However, many people’s understanding of CBD and THC are still shadowed by their shared origin.

Both CBD and THC come from the cannabis family of plants. They’re both cannabinoids, chemical compounds naturally found in plants indica and sativa–commonly known around the world as weed. It’s this infamous link that makes many do a double take on CBD products being peddled so openly. THC, after all, is still completely illegal for recreational use in the UK.

There are primarily three species of plants under the cannabis family tree: sativa, indica, and ruderalis. Over 700 strains of these plants exist, with new ones being cultivated each day. When people say marijuana, they’re probably referring to plants grown to have a high level of THC.

THC and CBD are both compounds found in marijuana. However, the CBD in most consumer products today comes from hemp. Hemp is a cannabis plant that is rich in CBD but has only .3 percent or lower THC content.

While the reputation of cannabis plants is largely tied to recreational marijuana use, hemp has a long and rich history as a material. The plant has been used as far back as 10,000 years ago by different cultures for creating everything from clothing, sails, and paper. The Gutenberg Bible–the world’s first printed book–is made of hemp as was the American Constitution.

The major difference between THC and CBD lies in a hormone called dopamine. Also known as the happy hormone, dopamine plays an important part in regulating our moods and pleasure.

Our body naturally produces dopamine, triggered by a variety of elements. To signal the body to produce the happy hormone, these elements bind to structures called receptors. We have millions of these receptors scattered around our bodies, working as a kind of system-wide control switch panel for regulating different functions.

The molecular structure of THC is highly similar to anandamide, a naturally occurring compound in our body that triggers the production of dopamine. It achieves this by binding to CB1 receptors in the endocannabinoid system, which plays a role in regulating our mood, stress, and appetite, among other things. THC is quite an effective switch, with some research showing that it releases even higher levels of dopamine than anandamide. This is where the “high” of ingesting or smoking THC come from.

CBD, on the other hand, interacts a bit differently with our system than its intoxicating sibling. This is where the atom-sized split with THC changes things. CBD does not bond with CB1 receptors. Instead, it alters how THC and other cannabinoids bond to the structures. For instance, it can negate the intoxicating and mind-altering effects of THC, or amplify the effects of anandamide.

THC and CBD share many of the same health benefits. Both are used for managing a host of mental and physical disorders, like anxiety and epilepsy. However, there are some areas where one is more effective than the other.

THC more strongly interacts with receptors in our central nervous system (CNS), while our peripheral nervous system (PNS) is more sensitive to CBD. The PNS controls muscles, joints, and relaying sensory information back to our brains. Many use CBD for treating chronic pain and reducing inflammation. THC helps manage nausea and vomiting, which are caused by stimulation or suppression of CB1 receptors. Some also use it to stimulate appetite and as a potential treatment for Post Traumatic Stress Disorder (PTSD).

Many prefer CBD because it can deliver the therapeutic effects of cannabis without the intoxication or risk of developing psychosis. That’s the reason why it’s already available in so many forms, from CBD oil to CBD food like gummy bears.

There are no known cases of people being put in significant danger by ingesting too much CBD. The worst that could happen is beeling overly tired, or getting an upset stomach. You would have to take 20,000 mg of CBD oil very quickly before it poses any considerable threats to your health.

On the other hand, THC has been known to cause serious side effects, largely in part to the cannabinoid’s psychoactive properties. Short term side effects include reduced memory and decision-making abilities. Some studies on marijuana use by adolescents suggest that THC use may have a negative impact on immature endocannabinoid systems, leading to higher impulsivity and impaired cognitive function.

The Legality of CBD vs THC

The law has changed very recently on CBD (we’ll be producing a guide looking in more detail on this) but as it stands, in the UK, CBD has been classified as a “novel food”, which now means it’s legal to sell in the UK, granted that THC content falls under 0.01 percent. In other words, so little as to be near untraceable. And while legal, those who want to sell CBD-infused food items still need to apply for a special licence.

THC itself is illegal in the country. A landmark ruling in 2018 allowed for medical exceptions, but with limited research and guidance on how to prescribe cannabis, few have actually been able to secure prescriptions and benefit from the drug.

The legal situation of CBD is changing as we write this so we’ll be reporting back on it in more detail soon.